Order from Barnes and Noble: here

The Empire of Lucent has stood for centuries as a beacon of strength and light. But now an otherworldly realm has unleashed an army of nightmarish creatures upon the peaceful empire, spreading a lethal plague called The Decay which consumes its victims mercilessly from the inside out.

The king of the Empire of Lucent calls upon “Lady of Death” Zephera Travelle—an infamous assassin with a weakness for braided cinnamon bread and a striking aptitude for murder and mayhem. He sends her on an impossible quest to find the one person who can concoct a cure and save the realm from total annihilation. Together with her best friend Zadkiel, mage extraordinaire Brenner, girly city-guard Oriana, and broody warrior Daegan, she embarks on a journey that will test her wits, will, and sanity. Along the way, she discovers that no one—and nothing—is as it seems, including herself.

Requiem of Sorrow, Prequel to Secret of Souls: 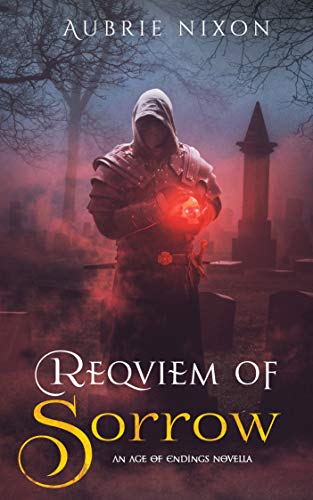 Daegan Sorrowhand is a simple young scholar whose sole desire is to spend his days in the Land of Somber’s most extensive library dreaming of a more peaceful way to end his kingdom’s suffering. Unfortunately, his overbearing father has other plans for him. As Daegan trains to become the reluctant captain of Somber’s most elite fighting force, he finds himself embroiled in both the land’s increasing darkness and the fires of passion and love. But tragedy forces Daegan to open himself to the darkness, and he finds he must choose between his heart and his sworn duty.
In this prequel novella to Secret of Souls, witness the events that set Daegan on his fateful path to the Kingdom of Lucent.

Get in on Amazon here.

Praise for Secret of Souls:

“A gorgeously imagined new world, filled with action and intrigue. I was enthralled until the very end.” -New York Times Bestseller Lisa Maxwell, author of The Last Magician and UnHooked

“Aubrie Nixon has created a story filled with twists and turns, where nothing is as it first appears. Fans of kick-butt female assassins will love Zephera, who never loses her humor as she takes on the darkest mysteries of her world. Secret of Souls kept me turning pages until the very end!” -Julie Eshbaugh author of Ivory and Bone

“Dark, enthralling, and so thrillingly beautiful! This book will have you on the edge of your seat and over the edge with needing the next! Aubrie’s debut is one that will knock you out of your socks and begging for more!” -Bestselling Author Amelia Hutchins

“A twisty, mind-bending fantasy with fresh and inventive world-building that kept me compulsively turning pages.” – Martina Boone, author of The Heirs of Watson Island series

“From monsters and mayhem to snark and swords, this story has all the right ingredients to make any fantasy lover’s heart swoon! Compulsively readable, you’ll find yourself wishing you’d brought a blade of your own as you accompany Zephera through the darkness.” – Sarah Glenn Marsh, author of Reign of the Fallen and Fear the Drowning Deep

2 thoughts on “My Books”